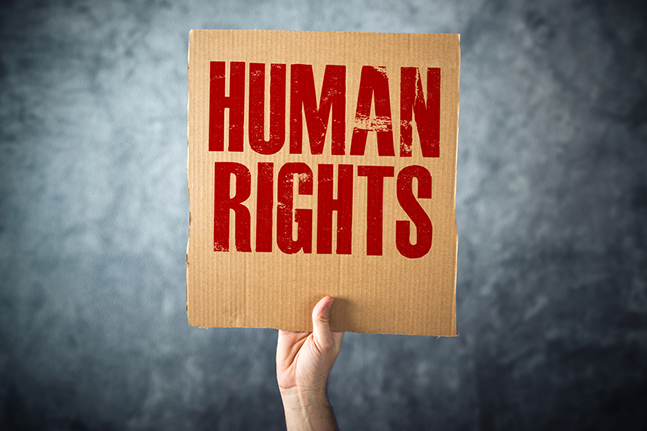 Islam is the most comprehensive and beautiful expression and also “encoding into law” of human rights. It is important to commence the article with a description of the way in which the human rights are presented in Islam. After this exposition, there will be a mention of non-Islamic representations of human rights in the text of law and in other written texts.

Islam teaches that God created human beings in the best and most perfect way. This honour that God gave to mankind in doing such also extends to the way in which human beings are conceived of as having dignity and honour.

Who created and proportioned you,

And gave you an upright nature,

And composed you in any form that He wished?

We are told that particular rights are associated with human beings, and that they are inviolable; it is reported that the Prophet of Islam said,

“All things of a Muslim are inviolable for his brother in faith: his blood, his wealth and his honour.”  Freedom of speech is reined in by the right to have one’s dignity and honour protected, thus slander, mockery and verbal abuse is not allowed insofar as it would be injurious to the honour of a person.

O you who have faith!

Let not any people ridicule another people:

It may be that they are better than they are;

It may be that they are better than they are.

And do not defame one another,

Nor insult one another by [calling] nicknames.

How evil are profane names subsequent to faith!

The same verse continues in this manner,

O you who have faith!

Some suspicions are indeed sins.

And do not spy on or backbite one another.

The topic of human rights is one that some non-Muslims and anti-Islam activists use to attack Islam. There is a misconception outside of Muslim communities that human rights in Islam are not protected. Even Muslims sometimes fail to provide the correct explanations to non-Muslims on this topic. If a person lacking knowledge about human rights in Islam were to read this article, the sincere hope is that they will no longer be vulnerable to these misconceptions. Hopefully there is enough material in here to extend their insight, so that their eyes are opened to the fact that provide Islamic law and human rights, far from being in conflict with each other, go hand in hand.

Human rights in Islam are eternal and unchangeable

These are possibly two of the most important attributes that are associated with human rights in Islam. In contrast, they are not attributed to human rights as defined in non-Islamic countries. In Islam, it is of course God (Allah) who is the giver of human rights, and as their origin is with Him, they can only be altered by Him. God has not only prescribed certain rights and protections for human beings, He has also made prescriptions for protection of the dignity of mankind into the hereafter, after death. It also goes without saying that both men and women are protected in the same way in Islam. A reference to the importance of human rights in Islam is also found in the Farewell Speech by the Holy Prophet, before his death; it is narrated that he said at Mina,

“No doubt, Allah made your blood, your properties, and your honour sacred to one another like the sanctity of this day of yours in this town of yours.”

What is the meaning of human rights in non-Islamic sources?

Before briefly referring to some non-Islamic sources, it is necessary to remember that there is in fact nothing new in the codifications into European or International law that was not already contained in the principles of Islam as revealed to the Messenger of God around 1400 years ago. The human rights conferred by God cannot be altered, however we are aware that even the Universal Declaration of Human Rights is merely a non-compulsory declaration issued by the United Nations in 1948. In Islamic systems, human rights in contrast to that are enforceable and guaranteed by the Islamic authorities.

The United Nations in the Universal Declaration of Human Rights define human rights as “rights inherent to all human beings, regardless of race, sex, nationality, ethnicity, language, religion, or any other status.”3 Human rights are also defined as “the right to life and liberty, freedom from slavery and torture, freedom of opinion and expression, the right to work and education, and many more.3 A major shortcoming of this declaration is that it has not specified a means by which violations of human rights can be prevented, or by which their violation is guaranteed to be punished. Postulating a code which enshrines the dignity of human beings, without the necessary means by which to provide for that dignity, in itself undermines the value of human rights.

A discussion of some of the individual human rights in Islam

Focusing on the protection of one’s life and honour, property, protection from slander and verbal abuse, as well as equality and justice, it is worthwhile adding a few Islamic references to explain these.

For example, in Islam it is prohibited to take even one innocent life, with the sternest of warnings,

That whoever kills a soul,

Without [its being guilty of] manslaughter

Or corruption on the earth,

It is as though he had killed all mankind,

And whoever saves a life

It is as though he had saved all mankind.

Although freedom of speech is postulated in Islam, it is also controlled within certain limits, so that the dignity of human beings is not offended,

The disclosure of [anyone’s] evil [conduct] in speech,

Except by someone who has been wronged,

And Allah is all-hearing, all-knowing.

As for the importance of the right to enjoy one’s personal property, one of the narrations is quite clear on this, in which the Holy Prophet is reported to have said, “Whoever is killed while protecting his property then he is a martyr.”

There have been various discussions around human rights in Islam, and invariably they will continue, one of them being a discussion of the Islamic vision of human rights as if it is particular only to the Muslimummah (Community), yet another one being an attempt to subsume the Islamic vision into the encoding of human rights as in European legislation, or as expressed in texts by the UN. A better way of understanding human rights in Islam is to rather view them as being universally applicable to all human beings, including non-Muslims. Islam for example does not restrict the rights and protections it ascribes to human beings, on the basis of their being Muslim or non-Muslim.

The innate nature that human beings are created by God is what gives them the capacity to behave in such a manner as to protect the dignity of others, and to understand how to protect their own dignity. Every single human being is created with this innate nature, in Islam. Given that in non-Islamic sources, human rights are postulated by human beings, whose intellects are necessarily fallible, there is the possibility that human rights are being conceived of in a wrong manner, and that they are of course also subject to change with the times.

The Story of Prophet Moses in Islam