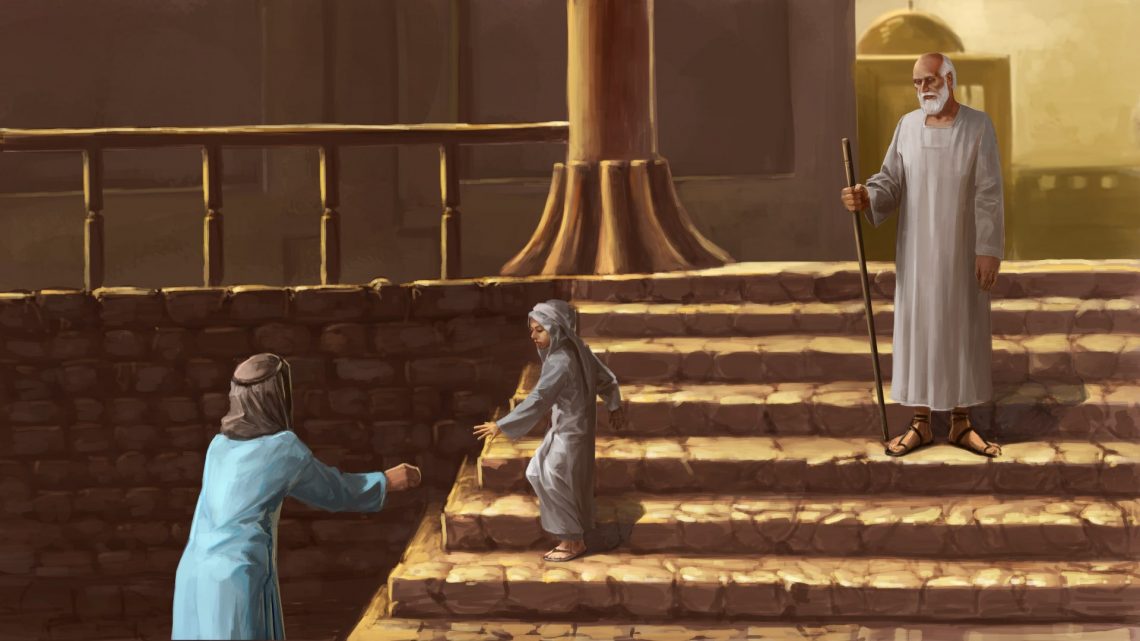 Zechariah, one of the Jewish prophets, albeit considered a minor one, is mentioned with great reverence in Islam and the other Abrahamic religions (Judaism and Christianity). In the Bible he is mentioned as the father of John the Baptist, who in Islam is known as Prophet Yahya, also a revered prophet. Zechariah was the husband of Elizabeth, the sister of Mary. He is said to have started his teaching in around 520 BC.

Although the Bible mentions various historical personalities named Zechariah, in the Quran there is only one Zechariah, most often spelled Zakariya.

This article will provide an overview of some of the main events in his life, and some of the outstanding qualities of his character. It is recommended in this context to also study the life of Prophet John the Baptist (Yahya) his son, although this article will only provide a cursory mention of his famous son.

The name “Zechariah” was very popular amongst Jews, which goes towards explaining the prevalence of the name in the Old Testament. Prophet Zechariah of the Qur’an, in the Bible is not mentioned as a prophet; rather, he is a priestly figure. However, the Bible also speaks of him with great reverence, referring to both him and his wife as “righteous”. The Gospel of Luke recounts Zechariah’s Davidic lineage through King Solomon’s grandson Abijah: “In the days of King Herod of Judea, there was a priest descended from Abijah’s line named Zechariah. His wife was from the daughters of Aaron, and her name was Elizabeth. Both were righteous in God’s sight, living without blame according to all the commands and requirements of the Lord.” (Luke 1:5-6)

Zechariah’s revered position in Islam is rooted in the fact that he is directly mentioned in the Quran by name, along with his wife are as being righteous and God-fearing;

They were indeed active in [performing] good works,

and they would supplicate Us with eagerness and awe

and were humble before Us.

Zechariah was an “ordinary” priest, one of the lower members of the priestly class who lived in the country towns and villages and would travel to Jerusalem to serve in the temple. He himself was from the hill country of Judea, the countryside residence of “ordinary” priests. His being of the Abijah line of priests also indicates that he was not one of the chief priests of the temple. This order of priests was the lowest of the orders of Jewish priests during that era, and the chief priests were not drawn from this order.

Righteous and Humble Priest in the Temple

It was during Zechariah’s duties in the temple that he first received the news from angel Gabriel about the pregnancy of his wife. It was the turn of his clan to serve in the temple at that time. Every priestly clan, including his own clan, the Abijah line, would in those days serve in the temple only one week every six months. The precise duties of the priests of each clan during that specified week were chosen by lots, and in that week, Zechariah had been chosen to place fresh incense on the altar in the temple before morning sacrifice and again after evening sacrifice. He was “chosen by lots to enter the temple of the Lord and burn incense.” (Luke 1:9)

There were a great number of priestly families in those days, being descendants from Aaron’s priestly line, and so it was a great honour for the priests when their turn came up.

One of the roles Prophet Zechariah is most famous for is his guardianship of Saint Mary during her service to the temple. His wife Elizabeth, being the sister of Mary’s mother, is described as having conceived in a similar way to Saint Mary in both the Qur’an and the Bible. In the Bible, we read that the angel spoke to Mary in the following manner: “The Holy Spirit will come upon you, and the power of the Most High will overshadow you. Therefore, the holy one to be born will be called the Son of God. And consider your relative Elizabeth – even she has conceived a son in her old age, and this is the sixth month for her who was called childless. For nothing will be impossible with God.” (Luke 1:35-37)

The Bible also tells of how Mary stayed in the house of Zechariah and Elizabeth for part of her pregnancy: “In those days Mary set out and hurried to a town in the hill country of Judah where she entered Zechariah’s house and greeted Elizabeth (…) And Mary stayed with her about three months; then she returned to her home.”(Luke 1:39-56)

The Qur’an speaks of the similarity in which Zechariah’s wife Elizabeth, and her sister’s daughter Mary conceived, Zechariah says to God:

He said, ‘My Lord, how shall I have a son

while old age has overtaken me

and my wife is barren?’

Said He, ‘So it is that Allah does whatever He wishes.’

The Qur’an also describes how Zechariah is given a sign by God;

is that you will not speak to people for three days

Remember your Lord much often,

and glorify Him morning and evening.’

Your Lord has made a spring to flow at your feet.

Shake the trunk of the palm tree,

freshly picked dates will drop upon you.

Eat, drink and be comforted.

Then if you see any human,

say, “I have indeed vowed a fast to the All-beneficent,

so I will not speak to any human today.”

Although Prophet Zechariah is spoken of with great reverence in Islam, and also to an extent in the other two Abrahamic religions, it is remarkable that his story is not better known. There is in fact some confusion in Christian literature regarding the death of Zachariah.

The events in his life together with his wife Elizabeth, and the patience, steadfastness and piety before God demonstrate beautiful characteristics that show the us what it really means to be God-fearing. One can only hope that this brief article will lead the reader to read the stories of Zechariah, and the related story of Prophet John the Baptist in both scriptures to see the commonalities and understand their importance in both religions. The lives of the prophets serve humanity as important examples, examples of morality and devotion which help us understand our own lives better and aspire to something higher.