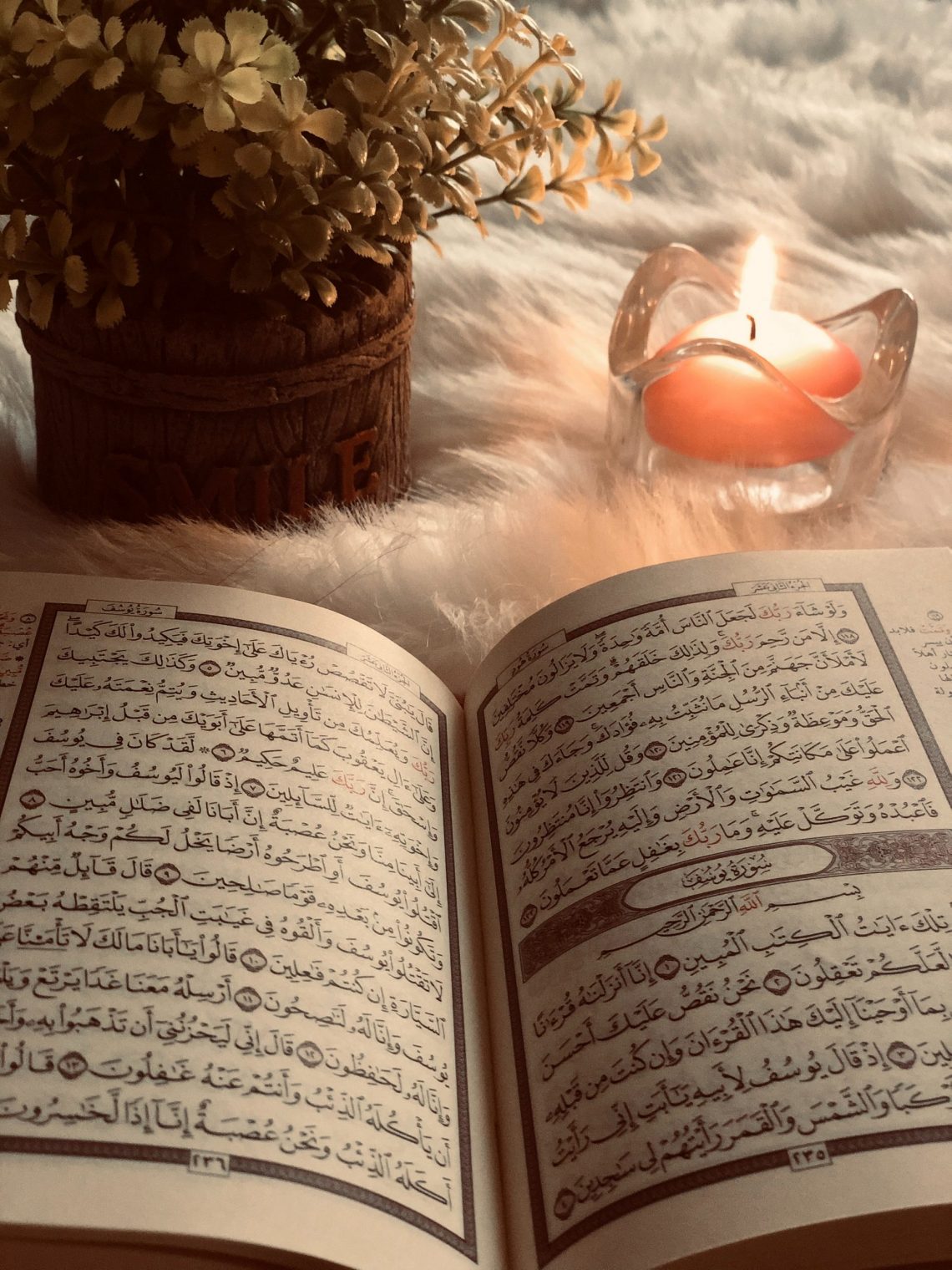 Five Parables in the Quran

Five Parables in the Quran

Before we introduce five parables of the Quran, here’s a short explanation about the Quran itself:

What is the Quran?

The Quran is the Holy Book of Muslims, a sacred text divinely revealed over a twelve year period to the Prophet of Islam, who is also considered the last prophet for mankind. As the verses (“surahs”) were revealed to the prophet, he would pass them on, and even during his lifetime everything was being memorised by heart by some of his closest companions, something which for Muslims is a testament to how the Quran has been perfectly maintained throughout the centuries. Later of course, everything was transcribed, with a checking process in place that meant that those who had memorised it, oversaw that it was written without errors.

The Quran has been presented as one of the miracles of Prophet Muhammad, and it is worth mentioning that the beauty and poetry of the language in the Quran has been said to be unrivaled. The Prophet who was himself illiterate, unable to read, had these same verses revealed to him.

The Egyptian scholar and poet Mustafa Sadiq al-Rafe’ie (1880-1937 AD), said of the Quran that “since human history was first recorded, no book can be found that has had as many commentaries, interpretations, books, and words written on it to the extent of that written on the Quran, not in a similar manner or even close to it.”

What is the purpose of the Quran?

One of the objectives of the Quran is to guide the people and to take them out of the darkness into light. For example, Ali Ibn Abu-Talib, the Fourth Caliph, cousin of Prophet Muhammad, and husband of his daughter, said, “And know that this Quran is an adviser who never deceives, a leader who never misleads and a narrator who never speaks a lie (…) no one will need anything after [guidance from] the Quran.”

The Quran itself explains its purpose;

This is the Book, there is no doubt in it,

a guidance to the Godwary.

One of the other purposes of the Quran is to establish justice on earth, which is an objective that all the prophets and messengers sent to mankind have shared.

Certainly We sent Our apostles with clear proofs,

and We sent down with them the Book and the Balance,

so that mankind may maintain justice.

The range of subjects that fall under the heading of Islamic Studies is large, and for the purpose of this article, we are interested mainly in the stories in the Quran. Individual subjects however range from “Tafsir” (exegesis, interpretation ofthe Quran) to Islamic History, Islamic Philosophy, Islamic Jurisprudence, and beyond. Looking closely at the stories, or parables in the Quran, does involve methods from the interpretation of the Quran.

The greatest stories from the Quran; famous Islamic parables

The stories in the Quran have specific purposes; if we remember that the Quran was sent to mankind to provide guidance, of course that also means that the stories in the Quran have deep meaning and lessons from which we can learn. The reader possibly knows the word “parable” from the Gospels. From the Greek parabolē meaning comparison, there are famous parables, and the literary form of parable has been used since ancient times.

The stories in the Quran consist of stories about the messengers of God, about honest as well as evil characters, with the story of Moses being the longest one. The story of Prophet Joseph is another, and often referred to as the most beautiful story, it consists of one hundred and eleven verse, elaborated in greater detail than in the Bible. The Quran itself states that this story is excellent “ahsan”.

1. The parable about charity

This parable about charity is as follows;

is that of a grain which grows seven ears,

in every ear a hundred grains.

Allah enhances several fold for whomever He wishes,

and Allah is all-bounteous, all-knowing.

It is worth mentioning that according to agricultural scientists, one stalk of grain can produce no more than 30 to 40 grains; an interpretation of this is that “the growth of the seed of charity seventy gold is a distinction which the seed of charity has over all the seeds in the world.” So this verse also describes the effects of donations.

The parable continues with the description of those who do not spend their wealth in the way of God,

Like those who spend their wealth to be seen by people

and have no faith in Allah and the Last Day.

Their parable is that of a rock covered with soil:

A downpour strikes it, leaving it bare.

A commentary on this is that it is refers to factors that invalidate a donation.

2. The parable about faith

This parable contains a famous phrase that has entered common usage across the languages and nations.

Indeed, those who deny Our signs and disdain them-

the gates of the heaven will not be opened for them,

nor shall they enter paradise

until the camel passes through the needle’s eye.

This metaphor is also found in the Gospels (Matthew 19:24, Mark 10:25, Luke 18:25). Whereas in the Gospels, the metaphor appears to be used to suggest that it is easier for a camel to pass through the eye of a needle than for a rich person to enter the Kingdom of Heaven, in the Quran the metaphor is explained to refer to the disbelievers, who are arrogant towards God’s signs.

3. The Parable of mirage

As for the faithless,

Their works are like a mirage in a plain,

Which the thirsty man supposes to be water.

When he comes to it, he finds it to be nothing;

This surah is named “Al-Nur”, because the word “nur”, the Arabic for “light”, is mentioned in this surah seven times; this particular verse is explained as giving  examples for the deprivation of disbelievers from the light of divine teachings.

4. The Parable of the Mountains

You see the mountains,

which you suppose to be stationary,

There are different commentaries on this verse; at the least, what can be said is that the mountains, which we consider stationary, move fast, which then also refers back to the fact that the land upon which the mountains are, moves fast. We should remind ourselves in this context that the earth upon which are the mountains, moves at around 30 kilometres per minute around its own axis, and that it orbits around the sun at a speed of per minute.

This verse is also referred to as one of the scientific miracles of the Quran, given that the knowledge of the movement of the Earth was not available until the end of the sixteenth century.

This subject matter of this verse is also explained as the punishment of enemies of the truth on the day of resurrection.

5. The Parable of the Spider’s Home

The parable of those who take protectors instead of Allah,

is that of the spider that makes a home,

and indeed the frailest of homes is the home of a spider,

The word “Ankabut” means spider, which explains the title of this surah, with the parable of the same name contained within. In the Tafsir of the Quran by Ibn Kathir for example, he comments on this verse, that “this is an example given by Allah, the Almighty, of the idolators who revere gods besides Allah…they are like the spider’s house, in its weakness and frailty, because by clinging to these gods they are like a person who holds on to a spider’s web and does not gain any benefit from that.”

Hopefully this article has served as an introduction to a variety of different topics, including Quran studies, Quran interpretation and Islamic studies. We hope the reader can now answer questions such as ‘What is a Quran Surah?’, ‘What do the Quran’s verses explain?’, ‘What are some different interpretations of the Quran?’

Only a few of the famous “Tafsir” of the Quran have been mentioned, and hopefully this has given the reader the impetus to read further. Understanding Quran and learning Quran are a common part of a Muslim’s education, and for the Non-Muslim too there is much material of interest, especially if that person is looking for moral guidance, and stories that are designed to communicate lessons in morality to people.

The Story of the Seven Sleepers in the Quran

7 Oldest Transcripts of the Quran in the World!